We were thrilled to see a review of the CSAT Javelin Rifle posted up on AR15.com. Hunter Rifleworks is an OEM partner of Faxon. Hunter has opted for our pencil barrels for their ultra-light premium Javelin rifle. We took the liberty of highlighting comments on the barrels.

I wanted to put up a little review about the Hunter Rifle Works CSAT Javelin. First off let me start by saying the owner is a top shelf in my book, and good as gold. He is not only well versed in the language of building AR platforms, but is also a quite capable shooter and instructor. So when you talk to him about what your looking for and what it will be used for, without a doubt he will understand.

I have been using the AR platform for many years, before I was in the military, in the military, and I have had one at work with me every day for the past 20 years as and LE. I have had just about every style, and build type there is. What I learned is when I was younger, and one of those high speed low drag SRT types, having the coolest looking AR with all the doo dads hanging off it was fine. Now many years down the road, I realize the benefit of having a light weight platform. I work for a municipal department now, so it is more of an urban environment, so something smaller and lighter was needed.

With that being said, I know a few things about the AR platform, but as far as building them from scratch, I am not the one to ask about that. I do however know what I need, want and expect from the platform.

In my earlier years of SRT one name stood out down here in Texas, Paul Howe. When it came to SRT training and tactics, he was the one we all went to. He probably trained most of the SWAT guys around here, and just about everyone one I know. He is Merrel Lynch in my book..when he speaks, I listen.

I am the lead firearms instructor and training coordinator for my department, so when the chance of attending some CSAT training came up, I jumped on it. The rifle course would be my first encounter with the "Javelin". The instructor of our course was Mr. Dave Montana, who works directly for and with Paul Howe and the CSAT team. He is also the brain behind the HRW CSAT Javelin. The rifle was designed by Paul Howe and Dave Montana. Hearing that I needed to see what this thing was all about. All I had to do was handle it, and I placed my order.

My Javelin was delivered to me by "Dave" a few days before the rifle class. I spent the next few days playing with different types of furniture to see what would work best for me. The Javelin comes with MFT Minimalist stock and BCM Mod 0 grip. I also opted out of the DD fixed sights. You can order the Javelin with just about any sight or optic you desire. I had a set of Troys from another rifle, that went on first. I also installed a Magpull MOE, then went to a CTR stock. I tried the new K2 grip as well. I also went with a VI lightweight BCG. With the equipment listed, the rifle weighed in at 4 pounds 11 oz. This was the lightest rifle I have ever had, and actually came in 2 oz under the Javelin in its stock configuration.

FWIW I have since gone back to the Javelin enhanced BCG as the VI BCG had some clearance issues with the billet upper. Dave fussed at me about using the VI in the first place, LOL. He said lots of hours and testing went into the Javenlin design, and what it comes with works, every time without question. The rifle shot fine with the VI BCG, but the charging handle had some drag caused by gas key and bcg being one piece. overall height was slightly more than a regular two piece setup, and thus was dragging on the charging handle. Either way the rifle function perfectly during the class with the VI BCG.

Accuracy was very good, better than most AR's I have had. The purpose of the Javelin is not long distance shooting, but even with the pencil thin 14.5 Faxion barrel, and crappy Federal ammo, it was easily one ragged hole out to 25. I haven't done any long distance shooting with it yet, but I have no reason to believe it won't perform as well as any Carbine rifle at distance. The one trade off I thought I would have would be overall accuracy as the barrel heated up, being so thin. We ran several strings of 5 and 1 going through 3 round magazines in succession. The groups may have opened up slightly, but since its initial groups were tighter than the other carbines in the class, it never opened up more than them. And everyone else was running M4 or Gov profile barrels. The nice thing about the thin barrel, is it cools off just as quickly.

I ran about 500 rounds total through the rifle that day consisting of the shooting during the course, and just playing with it. It is an absolute dream to shoot, very little recoil. The "Javelin" is set up as a 14.5 middy, and it had no issues through out the day. I have not run any steel through it, but Dave assured me it would run anything I wanted to put through it. The Javelin BCG has an adjustable gas key, in case you wish to run it suppressed, or have issue with some lighter loads. The Javelin can be ordered as an SBR and heavier barrels are available is one so desires.

Here are some of the specs of the standard Javelin

I also opted for the G2S trigger and it was well worth it. I know some folks out there are gonna say, wow I would never pay that for a rifle, I can build it cheaper, etc etc. Well, I didn't want to buy something and then have to put more time and effort into setting it up the way I wanted. I also wanted something I could trust without a doubt. If Paul Howe signs off on it, then count me in. I like to support small local business, and Dave Montana is a solid and knowledgeable person. Should I ever have any issues with the rifle, Dave would make it right.

The Javelin isn't for everyone. But if you are looking for a purpose built rifle that is just a little bit different, check it out. The build quality and everything else about it was flawless, until I scratched it up during my class. It's a tool folks, and if it doesn't work, it isn't for me.

I have since gone back to a BCM Mod1 grip and MFT stock. I also replaced the Troy sights with Magpul Pros. Last weight on it was 4.13 with everything but the optics.
If you decide you might be interested in one feel free to call Dave Montana, and tell him I sent ya. Oh and please forgive his funny accent, he is from East Texas. LOL. 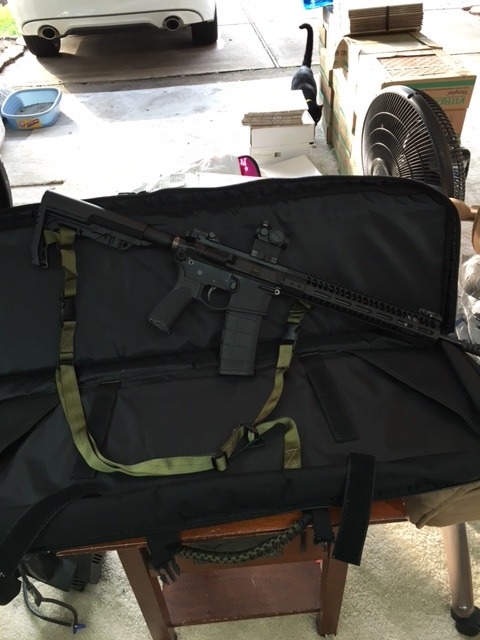